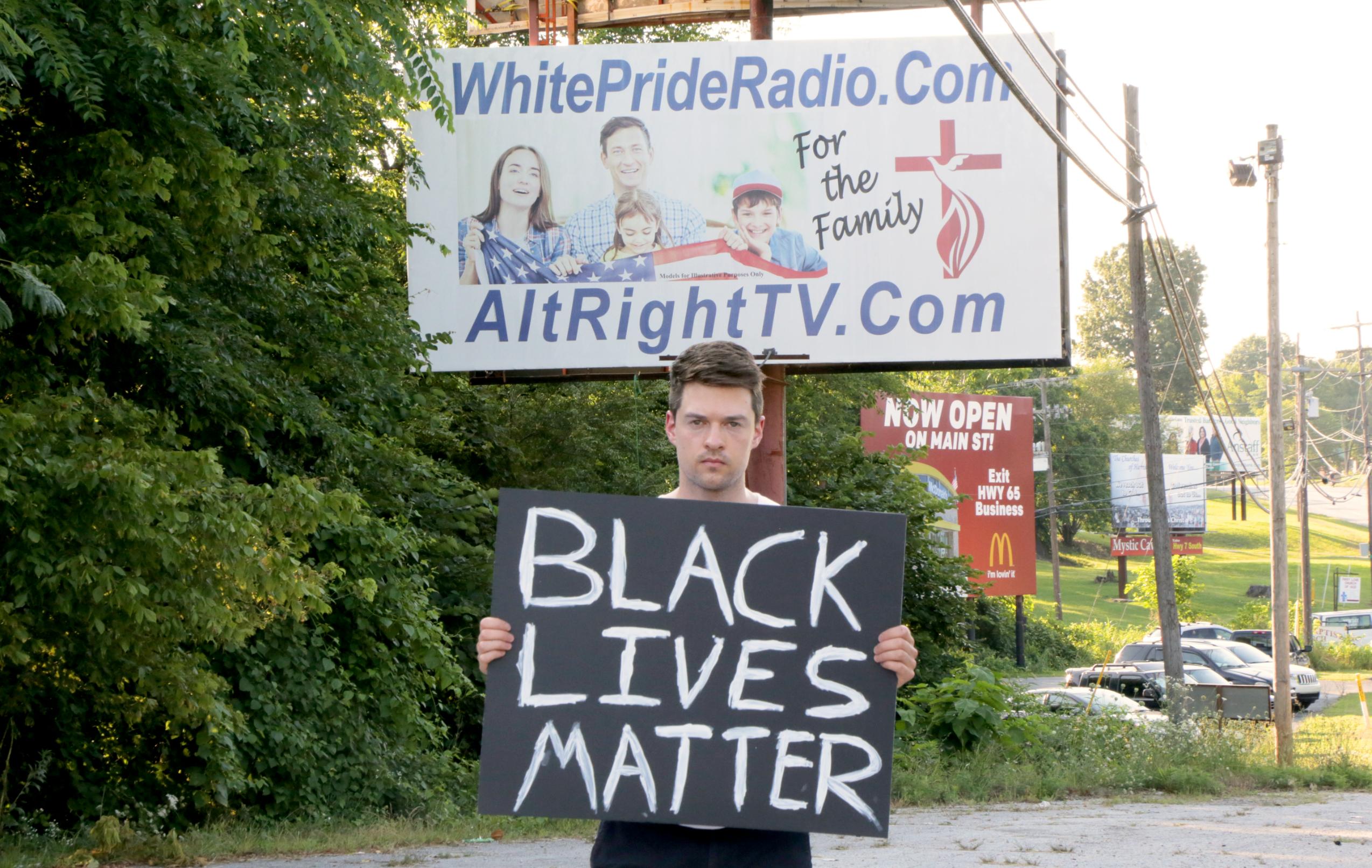 A White filmmaker traveled to a town just outside the headquarters of the Ku Klux Klan to document reactions to him holding a Black Lives Matter sign.

With a GoPro strapped to his chest under his shirt, out of view to his subjects, and a lapel mic on his body, Rob Bliss, 31, stood on the side of the road in Harrison, Arkansas, with his handmade poster. Harrison is 135 miles north of the capital Little Rock.

“They say light is always the best disinfectant, and by showing the reality of many of these places it helps expose people who are in these big cities that don’t really know what is still going on in the United States today,” he told CNN.

Bliss, a content creator from Los Angeles, is known for producing viral video campaigns on social issues. In 2014, he worked on a project showcasing what 10 hours of street harassment in New York City looked like for women, which was criticized at the time for only featuring minorities and little to no White individuals. In 2013, Bliss created a fundraising video featuring a homeless veteran receiving a makeover.

In his latest project, Bliss said he strung together an edited video compilation of what he believes is a raw look and reminder of just how prevalent racism remains in pockets of the country.

“There is a fair amount of preaching to the choir in liberal spaces,” Bliss said. That’s why he decided to travel to Harrison — a town “known for its struggle with race and White pride billboards,” he said. That, coupled with the fact that it is just outside of the home to the national headquarters of the KKK.

“I know that I have privileges and abilities as a White man to go into a nearly all White town and hold this sign without as much fear as a person of color would have,” he said. “I think it’s important where I have these privileges, I have a responsibility to use them to help lift up other people as well.”

According to the Southern Poverty Law Center and the KKK, Harrison is home to the national chapter of the group. Harrison Regional Chamber of Commerce President and CEO Bob Largent told CNN the organization is actually headquartered in Zinc, Arkansas, 15 miles east of Harrison.

Three days of hearing from residents

The two minute video was posted on Monday and begins with Bliss holding his sign in front of a billboard on the side of a busy highway in Harrison. It says “For the Family” with a picture of what appears to be a family and a cross next to it, with the websites WhitePrideRadio.com and AltRightTV.com across the top and bottom of the board.

“I think most people in passing didn’t realize that they were being recorded,” Bliss said. “But this is all happening in a wide open, public space with no expectations of privacy as you can see in the video.”

Throughout the video compilation of edited clips by Bliss, he captures residents driving past him and, at some points, walking by him, to express their animosity toward his presence. Bliss filmed over the course of three days the first week of July.

In the clips seen on his video, Bliss said he stood on the side of a main highway for parts of the video.

“Have a little pride in your race brother,” a man in a gray minivan says in the video while driving by Bliss. “White pride worldwide.”

In the video, another man in a tan car drives by Bliss, shows him his middle finger and says nothing at first. He then returns a second time to say, “About ten minutes I’m gonna be back, you better be f****** gone.” Bliss said that man didn’t return.

One person after another can be seen in the video berating Bliss for the message on his sign, some questioning his beliefs by asking if he’s a Marxist, Communist or domestic terrorist.

“Hey all lives matter, not just Black,” another man from a black SUV yells to Bliss. “You’re a Caucasian.”

But the video wasn’t entirely negative. At the end of the video, Bliss featured one clip of a woman handing him a handwritten note. Bliss said he blurred her face in the video for her protection.

“Ignore the haters you’re being peaceful,” the note read. “What you’re doing is good. Just a friendly reminder. Don’t give up hope.”

While Bliss was filming with his sign, he estimates about a dozen people took the time to offer him something to drink while he was standing in the heat. Clips of those interactions were not shown in his video.

“The video does not represent Boone County nor the City of Harrison,” the statement said. “While we cannot excuse the reprehensible behavior and words of individuals recorded in the video, we know for certain that they do not reflect the views of the majority of the good people of our communities.”

On Friday, Largent told CNN he continues to work with community, elected and business leaders along with a task force on race relations, a group that was formed in 2003 by Bob Reynolds who was mayor at the time. The task force is made up of local clergy and volunteers, according to the City of Harrison’s website.

“It is obvious there is still work to be done in our area and across the nation,” the city leaders’ statement said. “We must constantly strive to do better, and we pledge our continued efforts in that regard.”

The task force was created at a time when racial tensions in the area were high, group member Kevin Scheri told CNN. He joined their efforts in 2013.

Scheri, a Black man, said the purpose of the group is to “address issues relative to this perception of Harrison as this racist community.”

Since its inception, Scheri said the group has made significant strides to change the perception of Harrison by “facilitating resolutions to community issues through programs and conversations,” according to Scheri.

“What it has done for us is, it’s helped the few people who are still in denial see that there are a few people here with that mentality,” Scheri said. “But not to the degree in the way that it implies by the way that (Bliss) presented it.”